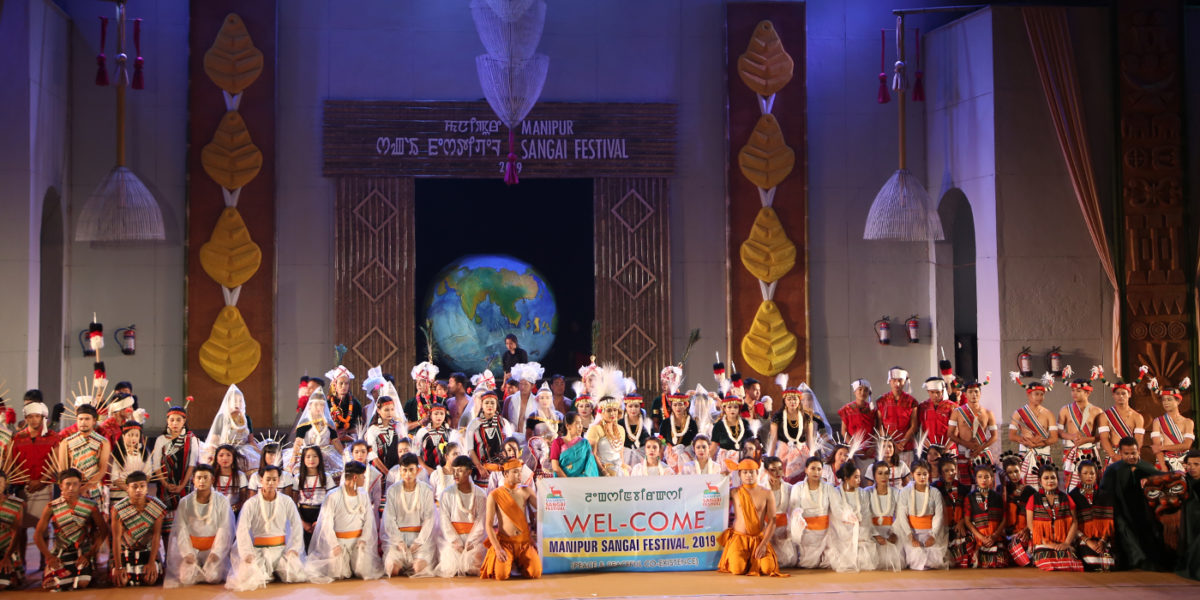 Every year the State of Manipur celebrates the “Manipur Sangai Festival” from 21st to 30th November. The ‘Festival’ is named after the State animal, Sangai, the brow-antlered deer found only in Manipur. It started in the year 2010 and has grown over the years into a big platform for Manipur to showcase its rich tradition and culture to the world. The festival is labeled as the grandest festival of the State today and helps promote Manipur as a world class tourism destination. Every edition of the festival showcases the tourism potential of the state in the field of Arts & Culture, Handloom, Handicrafts, Indigenous Sports, Cuisine, Music and Adventure sports of the state etc.

The festival will reflect the State’s proud cultural heritage and the love for art which is inherent amongst various tribes inhabiting the State of Manipur. The State’s classical dance form, ‘Ras Leela’ is quite famous all over the world for its distinctiveness from any other dance forms in India. The Ras Leela will form an important part of the dance performances at the Manipur Sangai Festival 2019 besides the various other folk dance performances like the Kabui Naga dance, Bamboo dance, Maibi dance, Lai Haraoba dance, Khamba Thoibi dance etc. which will be showcased at the festival.

The festival will also bring to light an array of Manipur’s best indigenous handlooms and handicrafts products. The themed huts of the variety of tribes at the heritage park will represent the living-style of these tribes and exhibit their indigenous products. The artistry and creativity of the tribes of Manipur will be seen in their handloom and handicrafts products which are otherwise not widely available in the market.

Indigenous sports will also be a major highlight of the State’s biggest tourism festival this year. Manipur’s famous martial arts- Thang Ta (a combination Spear & Sword skills), Yubi-Lakpi (a game played with greased coconut like rugby), Mukna Kangjei (a game that combines hockey and wrestling), and Sagol Kangjei- Modern Polo (believed to have evolved in Manipur) will all form part of the festival. Besides, there are a number of adventure tourism activities that one can indulge in while visiting the State. Adventure sports activities like trekking, white water rafting and parasailing etc. will also form a major part of the festival.

The Manipur Sangai Festival 2019 will also introduce visitors to the best of the State’s cuisines at a number of food stalls which will be opened during the festival. Manipur’s popular dishes include Nga-thongba (fish curry), Eromba (a dish prepared with boiled vegetables and fermented fish), Ooti (mustard beans), Bora (pakoda), Paknam (a baked cake of gram flour mixed with other ingredients), Singju (a spicy hot traditional salad), and Brown-rice Kheer etc. Every Manipuri dish whether vegetarian or non-vegetarian has its own distinctive flavour because of the natural and indigenous ingredients used in preparing them.

The past editions of the festival have been a huge success and brought a huge number of visitors from within and outside the state. Unlike the previous editions of the festival, the 2019 edition of the Manipur Sangai Festival will be organized at different locations in Imphal, Bishnupur and Senapati District from 24th to 30th November 2019. The decision has been made keeping in view, the increasing number of visitors to the state during the festival.